Winner of the 2015 Africa Geographic Photographer of the Year, Chris Renshaw, tells us about the great story behind his winning image which is now available (in limited edition) to purchase here.

“The sound of the vervet monkey’s alarm calling always sparks a rush of adrenalin in any guide. Something is happening,” says Renshaw as he begins the tale of a battle between a monkey and a leopard, a sighting he captured and that won him this prestigious photographic title.

“A once in a lifetime sighting that my guests and I will never forget! The harshness and reality of what we had just witnessed settled in and we drove back to the camp individually contemplating the raw power of life and death in the African bush,” says Renshaw.

Here’s his account of the sequence of events that led to this great image.

“A predator of sorts has been sighted and the manic calls send a rippling wave of warning through the troop ranks. A leopard! A fellow guide had heard the same alarm calls and got there just as the Ravenscourt young male leopard was catching his very first Ververt monkey. It was a very young monkey, an infant and could not have been more than a few weeks old. He caught it with what every cat has. Instinct, speed, agility and the ability to seize an opportunity. The mother Ververt had momentarily left the ground to investigate some fruit not 5 metres away, when the leopard charged in. He did not kill it, but proceeded to play with his quarry. Tossing it up and down, pawing, licking and jabbing it, climbing trees and dropping it, only to pounce on the shell-shocked monkey repeatedly. It was heart wrenching to watch, but we all knew that this was nature at its most raw, and sat transfixed. With the cries of the mother and the rest of the troop nearby, the infant held on to life and fought for freedom valiantly. This is when the photographic opportunity of a lifetime presented itself. The young male leopard trapped the monkey on the branch, it looked up at its mother, and the look on its face described the heartache and desperation it was experiencing. The definition of life and death.

A sharp growl from the mother leopard indicated that something else was to add to the dynamic. From behind our vehicle an adult hyena suddenly appeared. The cub (monkey in tow) and mother dashed up a tree with the Hyena skulking in for any signs of scraps. Growling continued until the Hyena realised that there was no meal to be had, and it casually lay down 10 metres away below the tree.

This prompted the young male leopard to begin to play with his quarry once again, as mother watched on impatiently. All of a sudden the cub dropped the still alive infant. Chaos erupted! Monkeys chattered, the Hyena bolted in, the cub lost his nerve, but the calm and elegant mother leopard simply dropped down, and in one motion retrieved the monkey and climbed to a higher part of the tree. She showed her disdain for her cubs mistake and the hyenas presence by quickly putting the infant to death. Simple, quick and lethal. With soft bones and young fur, she ate the infant whole. The cub was left a spectator, brooding on his mistake and learning a harsh lesson. The alarm calls of the mother vervets slowly subsided, and she slowly moved off, accepting the harsh reality of life and death.” 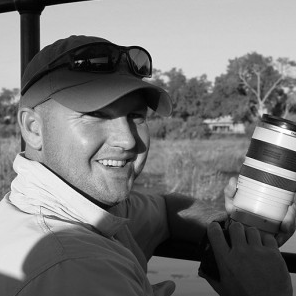 Renshaw is a wildlife guide, conservationist and photographer. His company, Safari Architects, specialises in privately chartered and privately guided bespoke safaris to all the incredible destinations Africa has to offer. “I’m passionate about experiencing all that these phenomenal destinations have to offer, with people who appreciate them. Photography is a journey that I love to share with people, and I feel that everyone has a style that is unique which people will interpret in different ways and look at differently,” says Renshaw. Follow Safari Architects on Facebook for a daily dose of Africa, and take a look at the photos from his trip to Uganda if you’re looking for a 5 min couch holiday.

Renshaw has a collection of limited and open edition prints available to purchase, his incredible sightings and photographic talent are featured as fine art prints in homes and offices across the country. Visit his DigitalGallery profile to learn more about him and the artwork that is available to order online.